You’ve seen them before…

…you may not know much about them, but they certainly seem to know a lot about you…

…so much so that that you’ve probably been creeped out by them at times. 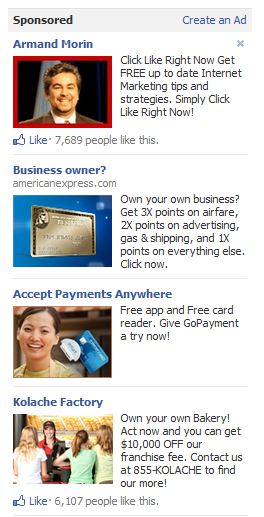 So how do these ads know so much about you?

Well, that gets to the heart of what makes Facebook ads such an intriguing marketing opportunity.

See, Facebook advertisers can target you by the information you put in your profile like gender, age, college, marital status, favorite books/movies/TV shows, pages you’ve Liked on Facebook, etc. (I’ve even seen tests recently where ads are targeted based on words you type in your Status Updates).

This is quite different from other online paid advertising programs such as Google AdWords.

With AdWords you target people by what they want and are actively looking for (based on the search queries they type into Google).

On Facebook you’re targeting them by who they are. And you’re doing this using arguably the most complete and accurate set of demographic information available to marketers.

One is not better than the other. They’re just different ways of reaching your target market. Which is better for your business depends largely on who your prospects are.

If you’re a DUI attorney, no one on Facebook is Liking pages that say “Hey, I like to drive drunk.” You’re better off targeting people typing “DUI attorney” on Google because they’re actively looking for you at the moment they have a serious problem you can help them with.

On the other hand, if your prospects are accountants, it may be very difficult to find keywords that only accountants are typing into AdWords. Targeting people by profession and/or college degree in Facebook is likely a much better way to reach your prospects.

Before we get into the nitty gritty of converting on Facebook, it’s important to understand what makes it such an intriguing opportunity right now. There are a few big market forces in motion that make it a great time to jump on board the Facebook paid advertising train.

It Ain’t All Sunshine and Roses

While there are plenty of reasons to love Facebook paid advertising, there’s plenty of frustration waiting for you if you do.

If you give Facebook paid advertising a go, be prepared for frustrations including:

Facebook is still trying to figure out this whole paid advertising thing and, hopefully, may of these issues will be fixed sooner rather than later.

However, the frustrations caused by these issues, and others, also offer an opportunity. A lot of people give up because they think Facebook paid advertising doesn’t work. That gives those who stick with it a definite advantage over their more easily frustrated competitors.

What does it take to run a successful campaign on Facebook?

Step one is getting someone to click on your ads.

Unlike AdWords, where ad copy rules, when it comes to Facebook, the image you choose has the biggest impact on whether you get the click or not.

Remember: people aren’t on Facebook to look at ads. They’re on Facebook because they want to see what their “friends” are up to, to kill time, and/or to find, and connect with, interesting people/groups/etc.

So to get them to notice your ad, you need to have an attention grabbing image. Here are a few good examples:

This first ad uses a few great tricks to grab attention – using a cute, crying toddler, having text in the image of the ad and using a red border. Any one of those strategies is good, using them together is great.

I used this next image in an ad campaign targeting CPAs. It ran successfully for about 3-4 months (which is a long run for a Facebook ad). Using big, red letters that specifically called out my target audience and positioned them as a hero (which tied in to the messaging of the overall campaign) was very appealing to accountants. 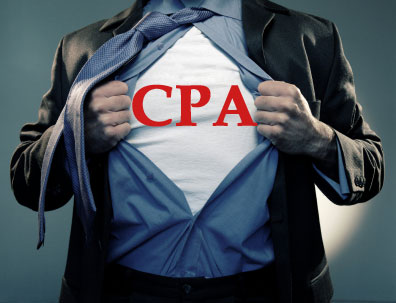 This one is fairly obvious…using a smiling, attractive woman in an ad works just about anywhere (just be careful because Facebook says the image you use has to be related to your business, which doesn’t appear to be the case here).

Lastly, you can use the power of social proof in your ads by running ads targeted to Friends of people who Like your Facebook page. This ad shows me that some people I’m connected to on Facebook Like HubSpot and displays an image of one of them. This really plays into the social nature of Facebook and is a great way to get the click.

Another key to a successful Facebook campaign is smartly targeting your prospects. As a marketer, Facebook’s 800 milliion users don’t mean much. So what numbers are important?

And here’s the beauty of Facebook advertising. You can break things down even further. That bar owner in Boston can run ads mentioning specials for Harvard students just to those who attend Harvard or “BU Night” only to those who go to Boston University. They can even run ads targeting students from all the local schools who are Engineering majors.

But getting the click is just the first part of the equation. The second, and more important part, is how to turn those clicks into business.

And that’s exactly what you’ll learn how to do in next month’s post!  Make sure you don’t miss it by subscribing to The Daily Egg!

About the Author:  Adam Kreitman owns Words That Click, a St. Louis internet marketing firm focusing on SEM for small businesses. He is aGoogle AdWords Qualified Individual and would love to have a conversation with you about Facebook Advertising.

Recommended Posts for You

What is Social Media Marketing ?

How to make Money with Amazon.com ?